GOOD to see the running scene thriving in my local city of Chelmsford these days. On Saturday mornings a remarkable 400-plus get stuck into the weekly 5k Parkrun, numbers seemingly rising on a weekly basis. Next weekend the newly-established EAN 10k race takes place, there's a new city marathon, and the cross-country and trail scene are prospering too.


Chelmsford has a rich running history of course. Back in the day, not only did wee Sydney Wooderson smash the British mile record on a field beside Roxwell Road, but the legendary Alf Shrubb regularly collected records and trophies galore at the annual New Writtle Street athletics bash.
After I published a biography of Shrubb in 2004*, there was a sniff of interest from film-makers about the story. Nothing came of that, but now, nearly 11 years later, a second company has emerged wanting to make a documentary about the forgotten hero of Edwardian sport. Fact Not Fiction Films, based in Sussex, announced their Shrubb project a few days ago and I’m delighted to be assisting.
When researching Shrubb, I was fascinated to find his breakthrough victory, the race that made the nation sit up and take notice of him, came in 1900 here in Chelmsford.
The annual Essex athletics and cycling championships at the New Writtle Street cricket ground was regarded at the time as the most prestigious meeting in the UK. Up for grabs was the huge new 50 guinea Atalanta Cup, which, along with a gold watch, went to the winner of the three-mile track race.
Shrubb was still very much a beginner in 1900, having only joined Horsham Blue Star club months earlier. He’d been ‘discovered’ while galloping along a country lane in boots chasing the local fire wagon!
He didn’t really have a clue about his chances in the big Chelmsford race, although somebody did tip him the wink that he’d be helped by the unexpected absence of Sid Robinson, Olympic medallist and English steeplechase champion.
Shrubb had never been to Essex before and was astonished as he made his way across Chelmsford on foot from the station. These locals certainly knew how to stage a day of sport. The station and streets were decorated with flags of all nations and bunting, the railway arch in New Street bedecked by a huge ‘welcome’ banner. Flowers and flags adorned the cricket ground and the grass track was lined with Venetian masts, supportings lines of flags. A ‘grand illuminated fairy fete’ was taking place in the Bishop of Colchester’s grounds over the road, plus a fireworks display and ‘Baden Baden’ concert. The Countess of Essex was there to present prizes. She arrived by train to be met by a four-in-hand carriage which processed through Chelmsford with crowds cheering and doffing their caps at this glamorous celebrity.
Spanish grandees Prince Leopold and Princess Marie de Croy-Solre were at the ground too, guests of a local businessman. The hullaballoo and atmosphere made Shrubb highly nervous, but he was desperate to do well having never before travelled this far from home to run.
Despite his butterflies and knocking knees, he was glad when the three-mile race finally got underway, taking off smartly and forging a substantial early lead. He cut such a fast early pace that a world record on grass looked possible. He steadied himself just past halfway, however, and won at a canter, breasting the tape in 15 mins 05.6 secs, his nearest opponent – Wellin of Essex Beagles – 150 yards adrift.
Being 1900, there were no female athletes in action, and at the prize-giving the Countess of Essex announced: “As on the occasion of the Olympian Games of old, what is called the superior sex is in force here today and we women are here to admire you, and look on and stimulate you for fresh exercises for other years. It is only at these gatherings at Chelmsford that we see sport of this kind – which beats all other kinds in the country.”
Little Shrubb stepped up to accept the huge Atalanta trophy, almost collapsing under its weight. He confessed later his first thought was how on earth he’d get home with such a massive vessel. Somehow he made it though, and on disembarking in Sussex, was greeted by a crowd of supporters who’d heard news of his great victory at Chelmsford. He was carried shoulder high like a returning hero, all the way to the pub which served as the Blue Star club’s HQ.  It proved to be a long and lively session! 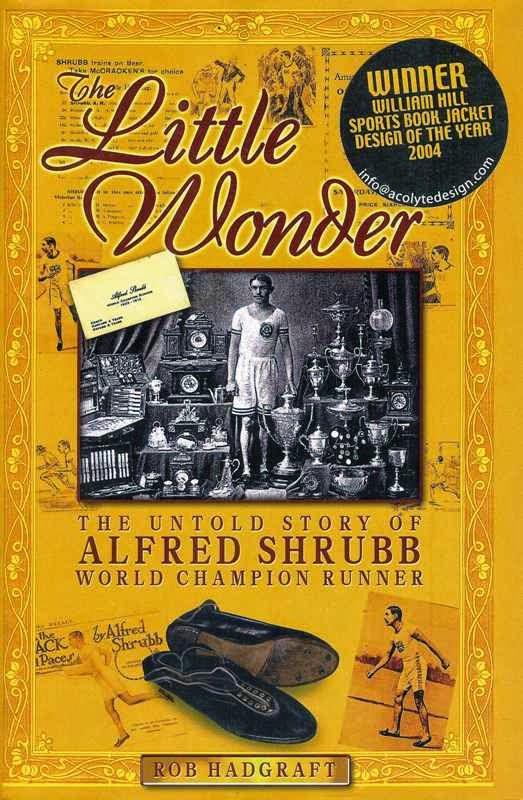 *      To check out Rob Hadgraft’s books on running legends of yesteryear, use this link: http://amzn.to/1C2BjUK or visit www.robhadgraft.com
Posted by Rob Hadgraft at 07:35