All revved up and nowhere to go! 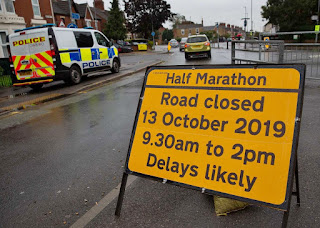 AFTER what happened at Peterborough last weekend, I’m relieved my efforts at the Tiptree 10-mile race on the same day didn’t attract the attention of the police.

Peterborough’s Great Eastern Run was cancelled on police advice after a man was seen out on the course “acting suspiciously”. Armed officers were sent in to investigate and 4,000 dismayed runners back on the start-line were politely asked to disperse and go home!

On reflection I might also have been seen as acting suspiciously at the Tiptree 10:  I spent the morning tampering with the digital race-clock, relieving a colleague’s vehicle of its battery, breaking into a big white van, shifting orange cones all around the road, and even shouting frantically at female runners.

But don’t be shocked, this stuff was all in a morning’s work in my role as marshal/helper at the finish-line zone! The shouting and pointing at women’s tummies may have looked a tad rude, but was only done if they crossed the line with race numbers obscured or missing. It was all done with a smile, and with the best of intentions – and I’m pleased to say many of the 400 finishers were full of praise for all the volunteers who made up Stacy and Simon’s team on the day.

The news of Peterborough’s last-minute police cancellation certainly generated waves of sympathy for their 4,000 runners. Talk about all revved up and nowhere to go. And one of them was the Assistant Chief Constable himself!

My personal memories of the annual Peterborough half-marathon are very rosy ones I’m pleased to say. It was here, back in the 20th century, I managed to clock a PB of 1 hour 19 minutes on their super-fast course. Yes, I admit doing the long drive to Peterborough that day was largely due to the flatness of the route awaiting us! A similar journey occurred a year later for the Wisbech 10, where those wide-open Fenlands helped me chalk up a PB of 58 mins 06 secs for the 10 miles.

Such running seems a lifetime away now, occupied as I am with some rather unpretty attempts to get back in shape for a few Parkruns, following many months of low mileage and injuries aplenty. I did manage to knock out 5k the other day – almost cause for celebration, as this hadn’t occurred in four months or more, for one reason or another. How times change. Literally.

(* Views expressed in this blog are purely my own and not necessarily those of the two long-established East Anglian running clubs I am privileged to have Life Membership of).