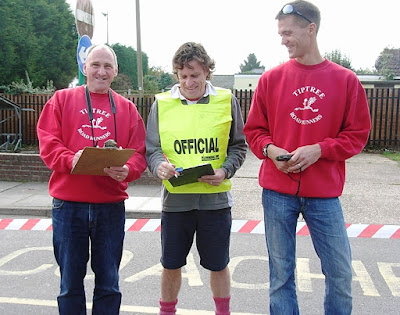 EVEN the very best runners know what it’s like to have a bad day, when a race performance falls well below normal standards.

On days like this we cringe at the sight of the official results, aghast and embarrassed, hoping not too many of our friends and foes will notice. Of course, it wouldn’t be quite so bad if those results sheets could also include the excuses we come up with for our bad runs (some can be perfectly valid, others laughable).

Imagine the content of the column where your performance is explained:  “Too much red wine last night” maybe, or perhaps: "Left the road three times for toilet purposes”. Or how about: “Wrong turn due to marshal asleep”.  The list is, of course, endless. Shoe-laces can come undone, kerbstones can rear up at you, and dogs can interfere with leg cadence. Out in the country lanes, your path can be blocked by horses and herds of cows. Happens all the time.

Yes, those sub-standard times are hard to stomach, but what is even worse is when you have a very good race, only to find there’s been a results cock-up. This is when your name and wonderful time gets recorded wrongly, or maybe doesn’t appear on the results sheet at all.  All that effort, and the rest of the world will never know!

I remember actually winning a race (yes, I still feel the need to mention this from time to time), only to have my moment of glory spoiled by the fact nobody else was paying any attention. Maybe it was my speed, or more likely a lack of organisation, but the finish-line officials at this particular race (it was in a Suffolk village) were not even in place as I swept around the corner with a big lead. As I powered down the final stretch to a cold and indifferent silence, it quickly dawned that my victory was about to go unrecognised, and that nobody was even looking in my direction, let alone recording my time and position.

As a result, nothing was announced by the man with the microphone, the compiling of results was left in complete disarray, and not a sausage appeared in the local paper (even though I worked there at the time!).  Not that I craved acclaim, you understand, but a tiny smattering of applause would have been nice.

If you’ve ever suffered from cock-ups on a finish line in any shape or form, you will have sympathy for the teenage female runner whose story reached me a few days ago courtesy of a friend of mine in Melbourne, Australia.   This Aussie runner suffered her fate on the biggest stage of all - the Olympic Games - back in 1960 in Rome.  In such surroundings you’d think there’s no way results could be fouled up. Think again.

Her name was Dixie Willis and she was widely reported to have failed to finish a dramatic 800 metres track final. But now, more than 50 years later, justice has finally been done, and it’s been clarified that the poor girl actually did finish and was not the humiliating ‘DNF’ we all thought.

Dixie was an inexperienced 18-year-old from Western Australia who had run the fastest time in the previous day’s heats in Rome and looked a real medal contender.  For the first 700 metres of the final, she was either in the lead or contesting it with eventual winner Lyudmila Shevtsova.

But from that point on, it’s unclear exactly what happened. Ancient film footage doesn’t provide a complete picture, but after conceding the lead at 700 metres she is seen to lose her balance, throw her arms in the air, and step onto the infield. She then slumps on hands and knees as the winner streaks home.

There was no unanimity in the reporting and recording of Dixie’s fate. Among the annotations were: “Fell 90 metres from the finish”, “Threw hands in the air and staggered off the track,” “Scratched” and “Tripped over the track border”.  The IAAF World Record Progression book says: “Fell over and did not finish” and Athletics Australia’s website says “Did not finish (fell).”

As for Dixie herself, she just assumed she would be disqualified for leaving the track and although hugely disappointed, took the matter no further in the 52 years subsequent.

There the matter seemed destined to rest, until my Aussie mate Trevor Vincent uncovered some YouTube footage of the race recently and sent it to an Athletics Australia official. The official was astonished to see Dixie Willis clearly jogging slowly across the Rome finish-line some 20 seconds after the medallists. She had finished after all!

Len Johnson and his Runner's Tribe website took up the story and Len says the only possible conclusion is that Dixie Willis did finish the 1960 Olympic 800 metres after all, and was not disqualified either.  She did in fact come 9th, which sounds an awful lot better than ‘DNF.’

The episode didn’t harm Dixie’s career for she went on to set world records two years later. But it’s amazing an Olympic result should take 52 years to clarify. If they get things wrong on the biggest stage of all, no wonder we have the occasional problem here on the village greens of Essex!
Posted by Rob Hadgraft at 07:22