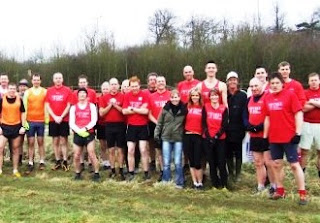 ESSEX police this morning issued a statement to reassure residents in the north of the county that unusual sightings after dark in the Tiptree area on Tuesday evening were nothing to be concerned about.

Several villagers living to the north of Tiptree, mainly in the Messing area, reported unusual phenomena moving slowly up and down the lanes surrounding the area at around 8pm. One anxious resident described it as a cluster of small yellow lights, which sometimes broke into smaller clusters, constantly on the move and sticking rigidly to the roads, although generally making rather laboured progress.  Speculation that this was a very low flying UFO were dismissed when one local swore he heard human voices from the midst of the lights.

The mystery may now have been solved by the news that local organisation Tiptree Road Runners has admitted to having sent out a club record tally of 43 runners onto the darkened Essex lanes for a training session on Tuesday, many of them wearing strange head torches and other ‘hi-vis’ material.

The flurry of worried phone calls on Tuesday saw police subsequently send a crack team of officers out to investigate, but they drew a blank, their only unusual finding coming on the hill leading to Newbridge Road. Here they discovered patches of blood on the road, consistent with a runner or pedestrian having come a cropper while labouring along the uneven right-hand side of the road.

A spokesman for Tiptree Road Runners confirmed that one of its female committee members did indeed experience a spectacular fall at the spot in question, but he expressed amazement that local people could have mistaken the club’s training groups for visiting aliens.

He said: “‘We are normal people from all walks of local life, and there is nothing unusual about going out in the dead of night to run seven miles. Messing is not a no-go area as far as we know, and there is no drug or gun-culture problems in that area after dark. We should be left alone to get on with our training.  We do wear strange lights and gadgets on our clothing, but it is ridiculous to mistake us for aliens. I admit a couple of our members do sometimes resemble ET after they’ve got a bit dehydrated, and others do puff and grunt as they run, but locals should not be frightened of this.”

Despite the apparent eccentric behaviour of its members, Tiptree Road Runners is regarded as one of the village’s most successful organisations, its membership recently reaching an all-time high of over 60. Although far from being one of the Essex’s largest running clubs, it was recently the only outfit to field four full teams at the county’s cross-country relay championships.

Tiptree runners regularly turn out in force at all manner of races locally and nationally. They can be identified by a bright red singlet, which bears the motif of a road-runner bird. They are generally friendly people and can be approached in perfect safety.  They have never been known to bite a member of the public, and indeed the club operates a strict policy of using a muzzle and lead to control any potentially dangerous members among its ranks.
Posted by Rob Hadgraft at 04:35