Ipswich to London via Kenya 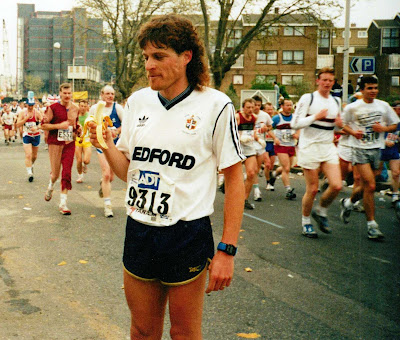 * A scheduled stop for a banana during the London Marathon suited me well,
but is unlikely to be part of the planning for local superstar Helen Davies next month!

LESS than ten years ago she was just another local fun runner. Next month she could clinch a place on the GB team for the 2012 London Olympics.

That’s a mind-boggling thought, but 32-year-old Helen Davies (nee Decker) still definitely has her swift feet firmly on the ground. By way of example, last Sunday she could be seen jogging along the roadside at the Great Bentley half-marathon, cheering on hordes of less-celebrated clubmates and friends, among them her husband Gavin.  For Helen this was an ‘easy’ day – just a steady 15 miles to complete!

But if Helen’s face betrayed a smidgin of anxiety that morning, it would hardly be surprising.  Her calf had felt inflamed earlier on, so taking on the job of Ipswich JAFFA cheerleader at Great Bentley enabled her to carry out a gentle fitness test on the offending muscle. To her relief everything felt fine afterwards. This, of all times, is most definitely not the point to get injured.

Many of us has-beens build up for events like the London Marathon with the sole aim of having a fun day out, enjoying the atmosphere and getting round in one piece. No such luxury for Helen - her job will be to run London in 2 hrs 31 mins, at worst!  Achieve that and her dream of becoming an Olympian could come true.

An impossible task for the former fun runner?  Not at all. Earlier this month she smashed records at the Tunbridge Wells and City of Bath half marathons, proving she is in brilliant form (1:12:35 and 1:12:40) and is quite capable of improving a marathon PB which currently stands at 2:35:43.

Next week she returns to Kenya for more high altitude training, feeling fit and confident. Her recent training has included weeks of well over 100 miles each and her confidence has been boosted by working alongside her role model Paula Radcliffe – not to mention the added kudos of obliterating Liz Yelling’s course record at Tunbridge Wells.

Radcliffe and Mara Yamauchi have already been named in the three-woman GB marathon team for the Olympics, which means Helen is fighting for the one remaining place.  Current favourite to get this is Jo Pavey, who ran 2:28.42 at last November’s New York Marathon. Pavey is unlikely to run next month’s London race now she has the ‘A’ standard qualifying time under her belt.

But Pavey’s preparations have not been trouble-free, for only last week she withdrew from a half-marathon in the USA, apparently suffering from flu.  Intense marathon training brings with it a high risk of injury and illness, so the destiny of that third spot on the GB team is certainly no foregone conclusion.

Helen is coached by Clive Sparkes, an Ipswich JAFFA stalwart for almost 30 years, who laughs off all the jibes about his new high-flying lifestyle as an elite runner’s coach. He claims, for example, the trip to Africa next week with Helen involves staying in “spartan rooms in mud hut territory”.  Those of us who know Clive find it hard to sympathise with his plight!


Ipswich JAFFA were my first club when I began running back in the 1980s and Clive was club chairman throughout my six years there. Having been formed in 1977, JAFFA was one of the very first ‘new wave’ running clubs to emerge in Eastern England and during the running boom of the 1980s went from strength to strength.

That was back in the days before Clive and I joined the ranks of middle-aged ‘Clapped-Out Runners’, when we trained and raced together at a similar sort of level. I don’t recall beating him too often, although my lifetime PBs are slightly quicker than his up to 10 miles, but inferior to his at distances above that.

Helen Davies is just one of scores of ‘beginners’ who have blossomed within JAFFA’s ranks,  and it is good to see she hasn’t been tempted away to join a bigger club outside the region or seek a more famous name as coach.

Interestingly, she isn’t the first Suffolk fun-runner to burst into prominence and make an impact on the international scene. I well recall the rise of Paul Evans, who worked in a shoe factory in Lowestoft and casually decided one summer to have a bash at his local Carnival 10k race.

Up to that point, Paul had been a Sunday morning footballer, whose only claim to fame was his ability to run around hard for 90 minutes non-stop. He thought he’d test his stamina on the local roads and, almost overnight, a star was born!  A short while later he came down to Ipswich, entered the Suffolk County 10-mile champs, and roared to a sensational victory and never looked back. In those days he was coached by local character Ted Mynott, but such was his meteoric rise that he eventually turned professional and joined Belgrave Harriers, going on to achieve the dream of becoming an Olympian.

Without wishing ill-health or injury on the splendid Jo Pavey, let’s hope things go in favour of Helen Davies over the next month and Suffolk is able to claim another Olympian among its home-grown runners . . .