Did this sort of thing really happen in our sport? 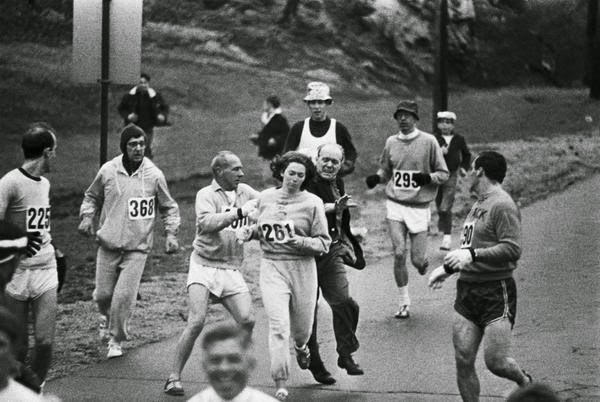 THE more you look at the picture above, the more shocking it seems.
Runner No. 261, the one they are attempting to kick off the road, is K.Switzer - a bona fide member of Syracuse Harriers. She's paid her entry fee, done her training, and was quietly running the marathon like all the rest of them.


So what exactly had runner K.Switzer done wrong? Well, she was a woman, that’s what! And I can personally vouch for that fact, for a while ago she visited my house in Essex and had a cup of coffee and a nice chat with us!
The picture was taken in April 1967, the event was the famous Boston Marathon, and the crazy-looking character attempting to wrestle Switzer off the road is Jock Semple, the Scottish race director. Jock was screaming “Get the hell out of my race!” determined not to have his event upstaged by a woman. In those days marathon running was seen as an ‘inappropriate’ activity for the female sex and if any women sneaked themselves into a race this was the sort of reaction it might produce.


Fortunately, Switzer’s boyfriend of the time, Tom Miller (in dark shorts), hurtled across the road moments after this picture was taken, and spectacularly barged Semple out of the way. Ms.Switzer continued in a state of shock, finished the race, and the world of marathon running was changed for ever.
Kathrine Switzer clocked a modest 4 hrs 20 mins for the 26.2 miles that day, but altered the course of sporting history. Within a few years women could freely and officially enter Boston, and other marathons, and no longer had to be wary of potential attack as they ran. Kathrine went on to fulfil her potential as a top runner (a PB of 2:51), and became a women’s sporting icon, and lots more besides. But what happened in the picture above is what first made her famous.


So what was she doing at the house of your Clapped-Out Runner in Essex, sitting in the conservatory and sipping my rather hesitant attempt at making a quality cup of coffee for a famous person?
Well it just so happens her partner is Roger Robinson, author and ex-international runner, and the couple were passing through my neck of the woods and took the opportunity to drop by and pick up a copy of my latest book, which Roger was kindly reviewing for a USA running magazine.


As the couple strolled into our house, I was momentarily tempted to hurtle towards Kathrine and bundle her into the flowerbeds, screaming “Get the hell off my garden path!” in a Scots accent - just for a laugh, you know, just to check her reactions after all these years. Of course that wouldn’t have been in the slightest bit funny, and I dismissed the thought quickly.
Kathrine must have told the tale of what happened mid-race at the 1967 Boston Marathon thousands of times, but she does it so well it bears repeating here:


“I was so surprised and frightened that I slightly wet my pants. I had never felt such embarrassment and fear. I’d never been manhandled before and never even spanked as a child, and the physical power and swiftness of the attack stunned me. I felt unable to flee, like I was rooted there, and indeed I was, since the man, this Jock guy, had me by the shirt. Then a flash of orange flew past, and hit Jock with a cross-body block. It was Big Tom in the orange sweatshirt.  There was a thud – whoomph! – and Jock was airborne. He landed on the roadside like a pile of wrinkled clothes. Now I felt terror. We’ve killed this guy - my God we’re all going to jail!”
Jock Semple didn’t die, 20-year-old Kathrine Switzer never went to jail, but the next day’s newspapers were full of pictures of her and life was never quite the same again.